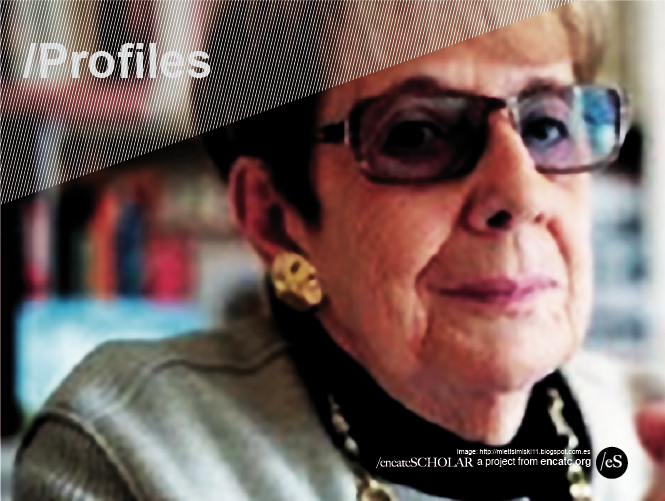 Raymonde Moulin. A French pioneer of the Sociology of Art

“Raymonde Moulin has always been a reference for the study of art professions, combining a detailed knowledge of the subject with an analytical sense that makes this information comprehensible. Her contribution is, for me, a model of sociological work which is concentrated, intelligent and informed on the theoretical level. She is clearly one of the greatest sociologists of the second half of the 20th century”. Howard Becker, sociologist [1]

In the landscape of the sociology of art, Raymonde Moulin (1924) undoubtedly singles out for special mention. Her research has had a clear impact on the differentiation of the sociology of art in relation to the philosophical aesthetics and art history. When studying the mutations operated by the sociology of art in the last decades, both in terms of theoretical assumptions and of methodological tools, her work must absolutely be considered. Her use of statistical measurements, empirical observation and qualitative methods (such as the interview) gave birth to a very useful knowledge regarding contemporary art, the art market and the status of the artists.

By the ends of the 1950s, instead of continuing her post-graduate studies specializing in ancient History, Raymonde Moulin wished to study the current status of the artist, which she first imagined as a star-crossed personage: ‘another Rimbaud’, a rather naïve romantic idea that she likes to recall when talking about that period in her life. She took advice from Raymond Aron, a preeminent French philosopher and sociologist, who counseled her to analyze the art market from a sociological point of view, which was a very innovative avenue at the time. With his support at the French National Center for Scientific Research (CNRS), she began to prepare a doctoral thesis, published in 1967 under the title The French Art Market, reporting on her comprehensive study of the world of French painting: she interviewed hundreds of painters, collectors, curators, critics, and gallery owners, and she evidently passed a lot of time hanging around the sites where they performed. Her approach combined a finely structured conceptual framework with the use of anecdote as a research tool; she pointed out questions intended to obtain generalizations; she was interested in the system of actions, interactions, transactions, collusions, arrangements and situations involved in the dynamics of the art market. She was able to objectify the actors without cheating them, on the contrary, she developed trust relationships, including artists Jean Dubuffet and Pierre Soulages and art dealers Daniel Cordier and Daniel-Henry Kahnweiler, to name just a few. An abridged version of this book was translated into English and published in 1987.

Raymonde Moulin has significantly contributed as well to the institutional organization of the sociology of art in France. In 1983, she created the Center of Sociology of Arts, which she directed for a number of years at the School for Advanced Studies in the Social Sciences (EHESS). An exceptional generation of researchers was fostered in that framework, such as Pierre-Michel Menger, Alain Quemin and Dominique Pasquier, who individually and together with Raymonde Moulin have produced sound pieces of research. She also was Secretary General of the European Center for Historical Sociology and the first woman chairing the French Society of Sociology in 1984. On behalf of the latter, she organized a great event, the 1985 Marseille conference on the sociology of art (13 – 14 June 1985), with the support of the CNRS, the EHESS, and in collaboration with the Research Committee 37 of the International Sociological Association. The several days of meetings to which she invited French as well as non-French scholars, mainly Americans, produced a volume edited by her, Sociologie de l’art (The sociology of art) including most of the conference papers, often referred to as a milestone that led the discipline to ripeness and acknowledgement. Many talks, such as the closing lecture by Jean-Claude Passeron, are now considered classic references.

In 1992, Moulin analized the crucial role of the articulation of the market and the cultural institutions and produced one of the most important sociological theories of the recent decades.

In 1992, with her book L’artiste, l’institution et le marché (The artist, the institution and the market) published by Flammarion, Moulin filled out her reflection on the subject by analyzing the crucial role of the articulation of the market and the cultural institutions and produced one of the most important sociological theories of the recent decades, along with the theory of the relative autonomy of the artistic field of Pierre Bourdieu (e.g. The Two Markets of Symbolic Goods). One of the main merits of Moulin’s approach has been its exemplary capacity to provide a means of orientation in the contemporary art world, as well as a deep understanding of its structures and procedures. Besides, the myth of the romantic bohemian artist was elegantly demolished by her sociological identification of artists, her analysis of the artistic vocation, the artists’ identity, their education and training, their professions and their careers.

She continued her insight in a number of further books (e.g. De la valeur de l’art, 1995 in which she deals with the relationship of visual artists and sociologists), and essays, including a thorough comparative study of the issue of the rarity of art works and how it affects their creation, trading and judging. Indeed, Raymonde Moulin has succeed in representing the evolution of the art market in the last three decades as a tendency leading to a interlacement of international interdependencies which nurture the circulation of people, works and information beyond national boundaries in a worldwide system of cultural and economic exchange processes, favoring the networking of the market. In her book Le marché de l’art: mondialisation et nouvelles technologies (The market of art, globalization and new technologies) published by Flammarion in 2000, revised and expanded in 2003 and 2009, Moulin depicts this atmosphere and argues that art dealing has taken a corporate turn in which the auction houses, the major gallerists and the major collectors operate globally, setting benchmarks for the others in a climate of speculation and risk. Price tends to become the major determinant of value. Some artists move along as well by progressively emptying their work of the traditional value signifiers: rarity, craftsmanship, seriousness, etc. This last book has recently been translated into Spanish.

Moulin’s works remain authoritative, and as Howard Becker notes, they are timeless, they are the exact opposite of some theories that proclaim the end of art or other definitive sentences whose relevance has swiftly been eroded.

While Raymonde Moulin has retired and has currently a serene research rhythm, she continues to publish articles which draw on her continuing participation in the world of contemporary French art and her delving into her interviews with Jean Dubuffet archives and into Outsider art (Art Brut).

Moulin, R. and Vale, M. (1995). The Museum and the Marketplace: The Constitution of Value in Contemporary Art. International Journal of Political Economy. Vol. 25, No. 2, The Political Economy of Art (Summer), pp: 33-62