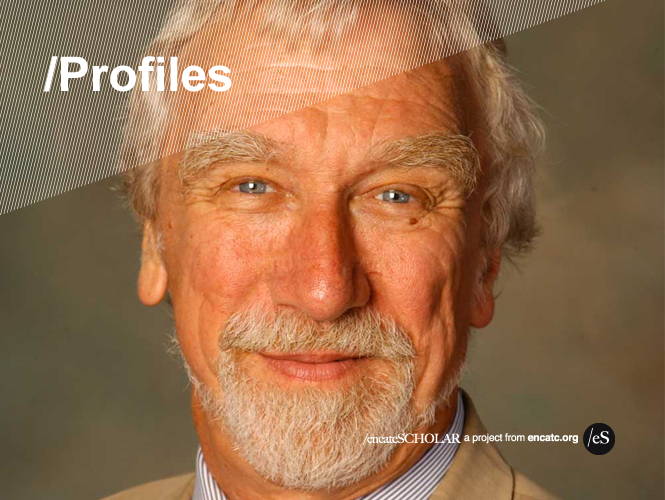 David Throsby (1939), renowned Australian economist, has gained international recognition for his research and writings in the economics of the arts and culture.

A distinguished professor in the Department of Economics, at Macquarie University, Sydney, Throsby holds Bachelor and Master of Science degrees from the University of Sydney and a PhD in Economics from the London School of Economics.

He has been a consultant to a number of national and international organisations including Sydney’s Museum of Contemporary Art, the Australiam Museum, the Copyright Agency Limited and VISCOPY. At an international level, he has ben a consultant at Food and Agriculture Organization of the United Nations (FAO), The United Nations Conference on Trade and Development (UNCTAD), UNESCO, The Organisation for Economic Co-operation and Development (OECD), and the World Bank.

Amongst his research interests we find the role of culture in economic development, the economic situation of individual artists, the economics of the performing arts, the creative industries, heritage economics and the relationship between cultural and economic policy.

According to Professor Throsby in a recent talk given in Chile [1], in the past 15 years the idea of the economy of culture has extended, even though it has always been associated with the Arts world, but culture covers much more than that, its politics involve shared aspects of our lives, our values and how we express ourselves. But how is this related to economics? Throsby explains how dance companies, for example, are businesses, because apart from being artistic agents, they must be profitable and be able to sustain themselves economically. And in terms of creative economy, he considers creativity as the basis of innovation, which in turn motivates and encourage technological progress that will inevitably imply a contribution to the economy. This is how creative industries are born.

For Throsby, one of the greatest challenge is how to measure the value of culture, that not only can be associated to money, but also to be able to determine its real value as an asset.

For Throsby, one of the greatest challenge is how to measure the value of culture, that not only can be associated to money, but also to be able to determine its real value as an asset. To cite an example, a building can be valued as an economic asset, but behind that building there’s also a geographical location, an architectural design and a historical background that can have as much or even more value. He also believes that too many times people see culture as an expense and not as a long term investment as it should be.

Professor Throsby’s latest book, The Economics of Cultural Policy, was published by Cambridge University Press in 2010. In this book Throsby analyzes how cultural policy is changing, in it he explains how traditionally, cultural policies have been concerned with providing financial support for the arts, for cultural heritage and for institutions such as museums and galleries but in more recent years, interest has grown in the creative industries as a source of innovation and economic dynamism. This book argues that an understanding of the nature of both the economic and the cultural value created by the cultural sector is essential to good policy-making.

In January 2014, David Throsby was made an Officer of the Order of Australia for distinguished service to the community as a leading cultural economist, to the promotion and preservation of Australian arts and heritage, and to tertiary education. Currently he continues to devote his career to study and enact the role of culture in economic development.

Throsby, David & Anita Zednik, 2010. Do You Really Expect to Get Paid ? An Economic Study of Professional Artists in Australia. Sydney: Australia Council.

Throsby, David (2012), ‘Artistic labour markets: Why are they of interest to labour economists?’ EconomiadellaCultura, (forthcoming).

Throsby, David (2012), ‘Sustainability and the Cultural Diversity Convention : Origins and implications of Article 13’, in Sabine Schorlemer (ed.), Commentaries on the UNESCO Convention on the Protection and Promotion of the Diversity of Cultural Expressions. London : Sage (forthcoming).