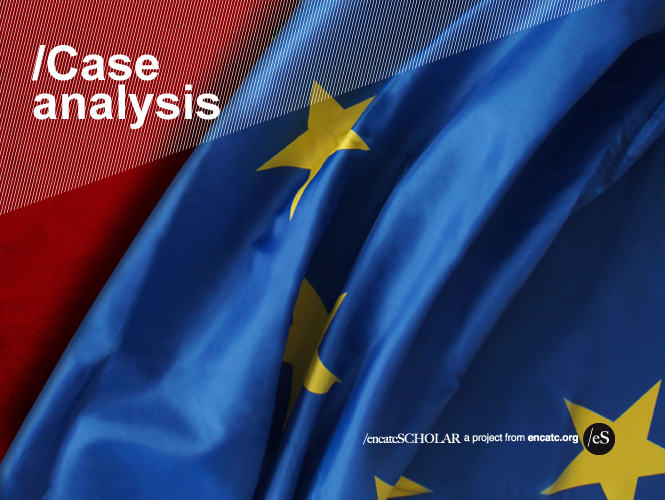 Thanks to the specific funding provided by European Union (EU) regional policy – mainly the programmes for territorial cooperation – European local and regional authorities set up more than 100 cross-border cooperative organisations that are commonly named “euroregions” (Morata, 2010). Different reports and studies showed that culture is a frequent domain of cross-border cooperation (Stange, 2005; CSES, 2010; ESPON, 2013).

In terms of typology, we can distinguish three main interactive dimensions in the mobilisation of arts and culture within euroregions. First, a “historic-heritage-dimension” refers to projects that underline common historical and heritage cross-border cultural features, which can distinguish from the “national” ones of the central State (for instance in France in the regions of Basque Country, Catalonia, Savoy, Alsace and Lorraine, the Flemish North, County of Nice, etc). Second, an “event-dimension” relates to cultural projects that participate to territorial marketing: cross-border festivals, literary or artistic prizes, concerts, exhibitions, and other types of cultural operations that allow advocating and promoting the euroregional partnership. Third, a “networking-dimension”, which refers both to the constitution of professional and sectorial networks strictly speaking and, more generally, to the networking between authorities, institutions and audiences: artistic residences and mobilities, specific tools like cross-border passes for museums or libraries, digital platforms and web sites, common cultural guides. There are also cross-border television programmes, such as those whom developed the channel France 3 since the 1980s in regions Alsace and Lorraine, Aquitaine and Poitou-Charentes, Brittany and Pays de Loire, Nord-Pas-de-Calais.

At the same time, culture and cultural policies fall within the normative paradigm of the knowledge and smart economy, largely based on cognitive and intangible resources and on the notion of sustainable development, in which creative and cultural activities are considered fundamental resources. In this context, culture has progressively appeared to be a concrete asset for the development and the attractiveness of territories, and a factor of social cohesion, as shown for instance in the terms of the current EU development strategy “Europe 2020 for a smart, sustainable and inclusive growth” (Council of the European Union 2011).

This analysis presents the cases of the Eurorégion Pyrénées-Méditerranée, created in 2004 at the Eastern French-Spanish border, and the Greater Region, formed between Luxemburg and its surrounding regions and Länder; with also data and elements from other euroregions. It is based on a PhD. thesis on euroregional cultural policy (Université de Grenoble, Institut d’études politiques) and on a post-doctoral fellowship in the Universitat Autònoma de Barcelona (UAB), Facultat de ciènces polítiques. The mainly qualitative analysis uses specialised documentary and bibliographical sources, and is illustrated with data, facts and information collected from fieldwork with institutions, artists, cultural operators and officials. It draws on more than 40 interviews and responses to a questionnaire from beneficiaries of euroregional cultural subsidies. 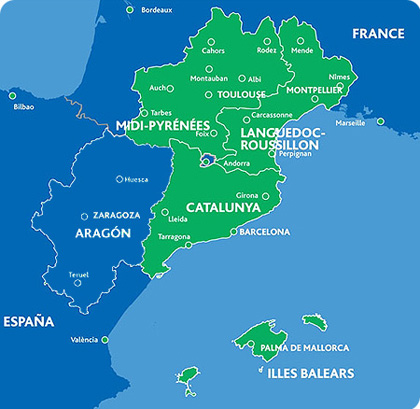 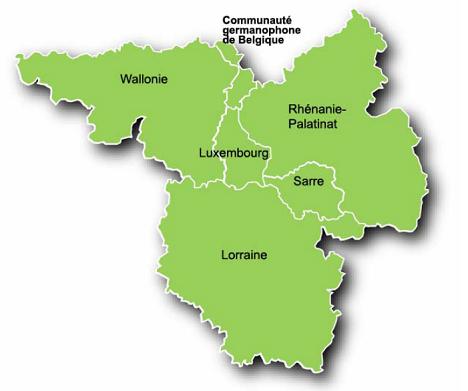 Eurorégion Pyrénées-Méditerranée was constituted in 2004 between the French regions of Languedoc-Roussillon, Midi-Pyrénées and the Spanish autonomous communities of Aragon, Catalonia and Balearic Islands. Since the beginning, culture has been a mainstream domain of cooperation. The authorities supported euroregional cultural and artistic initiatives through a specific agenda that includes a Culture Portal, calls for projects, annual cultural forums. Culture was also one of the first attributions of the European Grouping of Territorial Cooperation (EGTC)(a) that was launched in 2010 to reinforce the structure and governance of the euroregion.

Greater Region, which was created in 1995 following the “Saar-Lor-Lux” cooperation process that originated in the 1960s, was associated with Luxembourg to hold the title of European Capital of Culture (ECOC) in 2007. “Luxplus 2007”, which was the official name given to this cross-border European capital of Culture, was characterised by a political will to reinforce territorial cohesion and identity, and to give the Greater Region not only an economic reality but also a cultural one. In 2008, following this event, the members of the Greater Region set up an “Espace culturel Grande Région” in order to maintain the cross-border cultural dynamics that emerge during the ECOC.

In these cases, we can observe that culture is mobilised to brand and differentiate a specific euroregional “label”, and that there is an interaction between the event dimension of cultural policy and long-lasting cultural development strategies (Perrin, 2013). The main support to cultural projects goes to emergent disciplines, creators or even audiences, to innovative and even “techno-creative” actions and projects that link digital technologies to creativity, sustainable development, etc. The majority of the policies and schemes that are supported focus on the economic impact of cultural activities, and mainly on a crosscutting approach to culture, in order to foster territorial marketing and attractiveness. At the same time, the questions of cultural diversity and of “the living together” are important issues in the analysed cases. 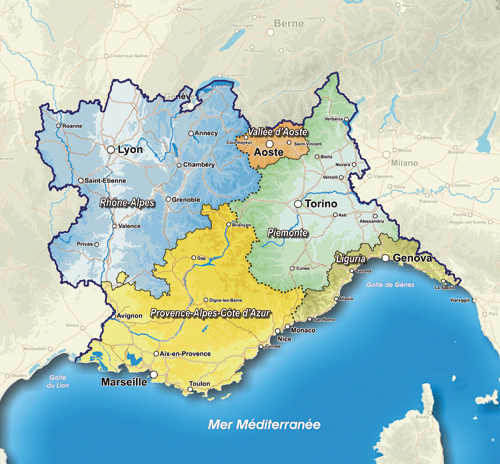 Quite similarly, the Eurorégion Alpes-Méditerranée, created in 2007 at the French-Italian border, tends to prioritise a contemporary creative dynamism rather than a heritage rooted in common history. The cartoon industry is promoted as a creative sector of excellence, which is of particular interest to the Région Rhône-Alpes: collaboration between professionals and common euroregional representations at the International Market of the Cartoon Festival in Annecy, or at Cartoon Movies, the European Forum of cartoon co-production in Lyon. Other domains of interest for the euroregional cultural agenda are: the youth, performing arts and cultural events that can help promoting the euroregion.

However, the case of Eurorégion Nord-Transmanche allows decentring and complementing the analysis (Perrin, 2012). This pioneer euroregion was created in 1991 between French region Nord-Pas-de-Calais, the three Belgian regions and the Kent County Council in England. Although some discourses presented the euroregion as a culture community, or even as a destiny community, they did not help to promote the durability of that co-operation, for such discourses were not followed by concrete actions.

The euroregional partnership was ended in 2004 following disinterest and disagreements from the members. But this institutional failure did not stop the development of cultural co-operation in that cross-border space – nor did it stop the institutional cooperation between the involved regions – and many of the cross-border cultural projects that are currently set up involve creative and contemporary disciplines, or festive events. The city of Mons in Belgium, which holds the title of European Capital of Culture in 2015, plans to organise a cross-border season with neighbouring French cities: Lille, as well as Valenciennes and Maubeuge that must be the Regional Capitals of Culture of Région Nord-Pas-de-Calais the same year. In that sense euroregional cultural policy can develop outside a proper institutionalised euroregional framework, which shows a certain resilience of cultural dynamics facing evolving institutional contexts.

In terms of policy-referential – according to the definition of this concept by Pierre Muller (2010), i.e. the values, norms and images that determine and direct the criteria, objectives and contents of public policy (Smith 2000) – euroregional cultural action is characterised by the centrality of the identity thematic. In cross-border context, cultural policies often back the discursive strategies about an emergent territorial and institutional identity. In this sense, cultural policies are linked to the organisational capacity-building of euroregions. Indeed participating to a euroregion can be an instrument of paradiplomacy for a territorial authority, and a way to reinforce its position in the European and international political arena. The cultural identity rhetoric can be based on historic-heritage references, but the cases analysed show an evolution towards promoting creativity and the excellence of some artistic and cultural industries and activities as symbols of socio-economic dynamism. At the same time the orientation of cultural policy criteria towards innovation, creativity and diversity can also appear to be an instrumental evolution following the priorities of EU regional policy programmes, which remain the major financial resources of euroregion cooperation – including cultural cooperation.

In terms of policy processes, the creation and implementation of operational cultural schemes and structures within euroregions, underlines the challenge of coordinating and regulating a common policy in a multi-level context, inter-territorial context (Perrin, 2010): cooperative articulation between the partners of the euroregion, interactions between the euroregional organisation in itself and the other territorial authorities that act on the same territory without taking part in the euroregional partnership (metropolises, provinces, State departments and agencies…). In any case, institutional discrepancies and political tensions, variations in political wills and priorities, can have an impact of the development of euroregional cultural policy, which underlines a certain instability and fragility of euroregions in spite of the discourses that advocate it: refusal of Communitat Valenciana to participate in Eurorégion Pyrénées-Méditerranée, partly in order to preserve its “differential fact” ; absence of Aragon from the EGTC Pyrénées-Méditerranée due to conflict with Catalonia; unbalanced involvement of the different members of Greater Region; delays in implementing the cooperation agenda in Eurorégion Alpes-Méditerranée following the results of the Italian regional elections in 2010, which changed political majorities .

In this way, the observation of euroregional cultural policies underlines the issues and challenges of cultural globalisation. Indeed, the euroregional dynamics emphasises quite at the same time the identity dimension of cultural policies, the interactions between culture, identity and territory, and the increasing place of culture and cultural matters as major issues of the international – interterritorial – relations. It also shows that artist and cultural professionals can be important actors to nourish the meta-geographic perceptions of territory and identity (Amilhat-Szary & Fourny, 2010).

However euroregional cultural policy does not always show a “virtuous circle” between authorities, professionals and population. Compared to the respective overall cultural budgets of each region, few resources are available to cross-border projects and only a few actors are involved in the cooperation schemes. This raises the question of a somehow limited audience, which is all the more problematic since participation is an essential element of cultural policy. Like in any other cross-border policy field, cultural cooperation strategies can also prove to be “at odds with the interests of the immediate local border communities” (Perkmann & Sum 2002: 19), which underlines more the potential discrepancy between the discourse, the practice of cultural cooperation and the everyday life of the euroregions’ population.

The actions developed so far can nevertheless be viewed as steps in the complex process of developing and institutionalising renewed forms of policies and governance, in emerging inter-territorial contexts. Furthermore, euroregions reflect both the opportunities and difficulties that can be observed, at a larger scale, from the European Union construction process in its challenging search for unity in diversity.

(a) This legal status was created in 2006 within EU law to facilitate the management and implementation of cross-border cooperation. Cf. Regulation (EC) No 1082/2006 of the European Parliament and of the Council of 5 July 2006 on a European grouping of territorial cooperation (EGTC). The Council of Europe has adopted an equivalent status in 2009: the Euroregional Cooperation Grouping (ECG), which proceeds from the Protocol No. 3 to the European Outline Convention on Transfrontier Co-operation between Territorial Communities or Authorities.

(b) The Constitutional principle of “differential fact” [hecho diferencial] is a guiding line of the devolution process that started in 1978 in Spain. It links sub-state ethnic and cultural mobilisation to a competitive interplay among Spanish regions and nationalities in pursuit of political and economic power.

(c) Though according to Italian actors, the new changes following the elections of 2014 could favour a relaunching of the cooperation.

CSES: Centre for Strategy and evaluation Services, [in collaboration with ERICARTS]. (2010). Study on the contribution of culture to local and regional development – Evidence from the Structural Funds. [online] : http://ec.europa.eu/culture/key-documents/doc2942_en.htm