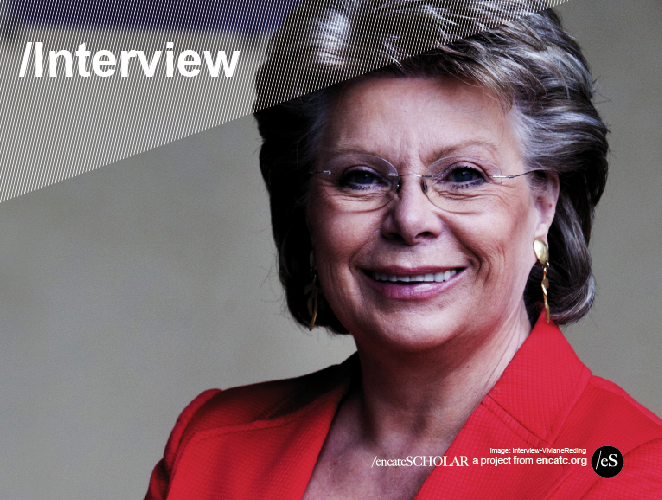 Why have a year 2013 devoted to European citizenship?
Because today Europe is at a cross roads. The future of Europe is the talk of the town – with many voices talking about moving towards political union or a United States of Europe.

“More than half of Europeans (68%) feel that their voice does not count in Europe – this must change”.

For me it is essential that the European people have a big say in this debate, that that they have a stake in their future. More than half of Europeans (68%) feel that their voice does not count in Europe – this must change. We have to build our European-house together with citizens, not build it and only then ask them if they want to live in it.

This is why we have made 2013 the European Year of Citizens, a year dedicated to you and to your rights. Our task will be two-fold: Half of our work will be about explaining – explaining what it means to be a European citizens and  the rights that you have by virtue of being a European citizen.  And the other half will be about listening. Throughout the year, my fellow Commissioners and I will join forces with national and local politicians in holding debates with citizens all across Europe – to listen to them and answer their_questions. We will be engaging in a direct debate with citizens about what they want, how they feel about their rights and where they want to see the Union progress to in the next ten years. European citizens’ must be able to voice their concerns and prepare the ground for future elections.

Why should the young generation care about “European citizenship?
The young people of today are the voting electorate of tomorrow — the future is in their hands! It is important that all European citizens, especially the young, understand that the European Union brings tangible benefits that affect their daily lives for the better. Union citizenship is not an empty concept, but a true and meaningful status that we can enjoy in addition to our national rights.

For young people, the most significant of these rights revolve around the freedom of movement: young people are free_ to reside, take up employment, training or study anywhere they like in the European Union. Thirty years ago, when I was a local Councillor, you could not even travel the single kilometre from my hometown of Esch-sur-Alzette in Luxembourg to Russange in France without a lengthy wait at the border. Today, young Europeans can travel over 3000 kilometres from Vilnius in the North-East to Valencia in the South-West, crossing five national borders without once having to stop to show their passport.

Our citizens are ‘acting European’ and utilising their rights on a daily basis. Europeans are benefiting from increased protection on cross-border purchases, guaranteed treatment in other EU Member States through the European Health Card and cheaper roaming charges all thanks to European legislation. These are things that earlier generations of young Europeans could only dream of.

We must never forget that we Europeans have created something extraordinary, something we too rarely feel proud of: today, 500 million people live in the European Union in peace and freedom. The young generations should make their voices heard, by voting, by addressing the Ombudsman, by launching a Citizens’ Initiative – however they feel! That is what the European Year of Citizens is about participation and engagement and about taking ownership of our common European future.

What is the role of culture in this context?
The cultural sector is a crucial player in influencing the opinions of the general public. For me, the cultural sector has a potentially very powerful role in the European Year of Citizens, since a key challenge of the Year is to raise awareness about our EU-level rights and our status as Union citizens.

I think that the cultural sector, especially the mass media, could use the occasion of the European Year to create cultural content (documentaries, information films, adverts, etc.) to explain the policies and programmes that exist to support the enjoyment of these EU rights, and also to help build momentum to remove any remaining obstacles that people face when exercising their EU rights.

What do you think should be done by politicians, educators and media to better contribute to reinforce the sense of belonging to a common family (Europe)?
I am encouraged that in 25 of our 27 Member States (and soon 28, with Croatia), at least half of those questioned say that they “feel like EU citizens”. However, while many might “feel” like European citizens, only a minority actually know the EU-level rights that this grants them, such as the right to move and reside freely in any Member State, or the right to vote in local or European elections wherever they reside in the EU.

I believe that European citizenship must be to the Political Union what the Euro is to the Monetary Union: A lived, tangible reality. The general public’s lack of awareness of their EU-level rights is a major obstacle to their sense of belonging to our common ‘family’, the European Union. For me, therefore, the role of politicians, educators, the media—indeed all those who influence and inform the general public—must be to listen to the citizens and explain more effectively, consistently and honestly the benefits that the EU brings each individual. Building the EU that European citizens want is a political necessity and a historical responsibility — we must make sure that citizens are ‘on board’. The European Year of Citizens provides us with a great opportunity to make this happen, and everyone has a role to play in making it a success.

Which are the key moments of the year? (major events)

“My goal is to remove the remaining obstacles that people face when exercising their rights so as to make EU citizenship more than just a concept”.

The centrepiece of this year will be the 2013 EU Citizenship Report, due in May 2013, where we will set out how we will tackle the most important barriers to EU citizens exercising their rights. Despite a lot of progress in recent years, there we certainly still have work to do. My goal is to remove the remaining obstacles that people face when exercising their rights so as to make EU citizenship more than just a concept. It must become a reality for Europe’s 500 million citizens.

Throughout the European Year we will be collaborating closely with the other EU Institutions, Member State authorities (at national, regional and local level) and civil society organisations’. Consequently, there will be many events right across the European Union, throughout the year. At EU-level, there will be a series of thematic conferences on the topics of the Year, starting on 22 January in Brussels, and continuing with events later in the Spring in the European Economic and Social Committee and the European Parliament. Our official website for the European Year has an events calendar where these events, and many others, will be displayed (www.europa.eu/citizens-2013).

Throughout the year 2013, I will also join forces with other EU Commissioners, with Members of the European Parliament and with national and local politicians to hold town hall debates with citizens all across Europe – to listen and to answer. We are coming to listen to their concerns, their opinions and to discover what kind of Europe they want by 2020 – you can find out when we’re coming near you here: http://ec.europa.eu/european-debate/

What do you expect as short and long term results from this action?
In the short run, from a policy-making perspective, the European Year will help build momentum to remove any remaining obstacles that people face when exercising their EU rights.

In the longer run, I am convinced that the difficulties that the European Union currently faces will in the end lead to a stronger European Union than the one we have today: A stronger Economic and Monetary Union, a full Political Union, a European Federation and a Union that is at the service of its citizens. But as we construct our new European house, we need to take citizens with us. It is important for citizens’ to engage in a debate about what type of European Union they want to create and also leave to future generations of Europeans. Of course, every year is about us as citizens, but the 2013 European Year of Citizens can serve as a catalyst for fostering this renewed debate.